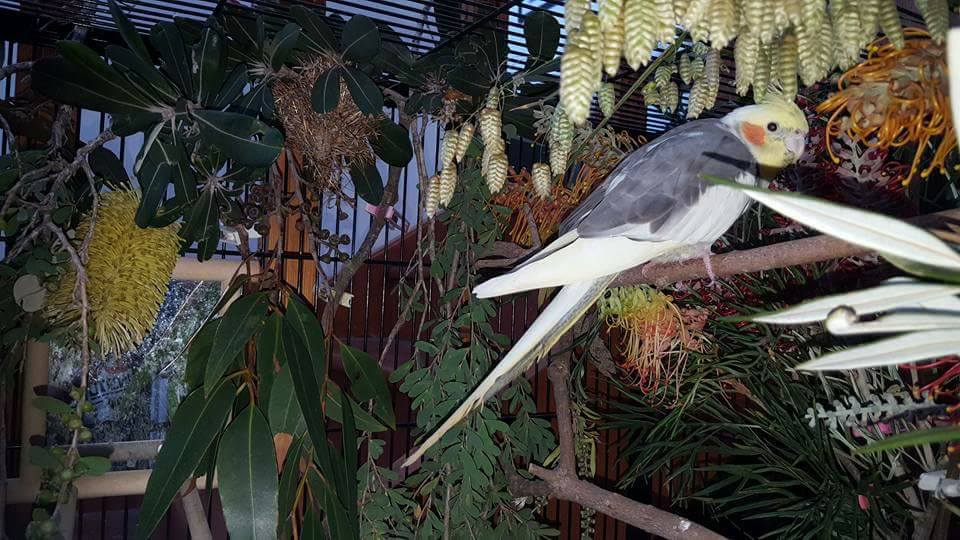 Moulting is complex process involving lots of chemicals, many of them poorly understood. Here is a much simplified explanation of what governs the moulting process.

All feathers start out as pinfeathers, the shaft of a feather on your bird as it is developing is alive, it will have a purple-blue colour and it will bleed profusely if it gets injured, feathers when they are fully formed are dead and cannot be repaired. Different types of body feathers have different names.

The feather consists of a central shaft with a hollow base, called the quill or calamus, the remaining shaft is called the rachis. The feathery sides or vane are composed of individual barbs, which are, themselves, covered with smaller barbules that keep them “zippered” together. The fluffy base portion is called the afterfeather.

Normal moult has nothing to do with temperature or new feathers pushing out old ones. It has everything to do with a natural hormonal rhythm that all birds maintain. The moult in all birds is controlled by diurnal, circadian or photoperiodic clock that allows your bird to track the seasons and time its moult to coincide with breeding cycles and food availability.

In nature the bird’s circadian clock remains accurate due to clues obtained from the environment around it mainly the shape of the light length curve, it responds to the amount of red light (about 640nm) being received. Indoor birds that do not have access to full spectrum lighting timed to mimic the outside environment can have their circadian clock disrupted. Outdoor birds relied on natural sunlight so their clocks kept better time.

Indoor parrots that receive artificial light have extended moult periods and they may have several per year. They may also retain certain feathers for over a year. That is because their clock is free–running and no longer precise. Wild Cockatiels are said to have two molts, one before breeding and one after fledging their young. Australian cockatoos time their reproductive subsequent moult cycles to lengthening spring days. The circadian clock and moult cycle clock can only be reset by a period of short, winter days.

During a normal moult the primary wing feathers are often the first to fall out during a moult. Usually, the inner ones fall first. Then the secondary flight feathers and tail feathers start being lost and replaced, followed by the contour feathers.

We know what hormones are present when a moult occurs, we do not know exactly how they operate to control the moult.

Cytokines are messenger proteins that carry signals locally between cells, they have been found to increase when a moult begins.

Melatonin tells the bird when to moult. It is the primary hormone produced by the pineal gland. Melatonin is called the time keeper hormone its production and secretion are timed to the amount of light that is present. It is the body’s central timekeeper. Its presence or absence controls the production of all other hormones involved in reproduction and moult as well as all differences between day and night time behaviour. Melatonin is secreted when it is dark. Blood melatonin levels reach its highest peaks in the spring when days are lengthening and its lowest peaks in the fall and winter. (this is contrary to the lenght of the night during which time Melatonin is produced).

Progesterone is produced by the ovaries of birds as they go through their reproductive period. Progesterone is known affect the blood LH level of birds. Birds that do not moult may also fail to reproduce.

Its known that birds that have had their thyroid glands removed have a number of problems including the inability to moult normally. This hormone rises whenever the body must synthesise proteins and in response to cold.

Many birds become less active and moody while moulting. Your cockatiel may not be as affectionate with you as it normally is, they will scratch themselves more as the new contour and head feathers sprout.

Damaged pin feathers will not heal on their own. They will continue to bleed when they are moved or disturbed. So you need to pluck out the damaged pin feather. if the task is beyond your abilities bring it to a veterinarian or experienced aviculturalist .

If a damaged pin feather is allowed to remain, it will, at best, mature distorted. A worse development is when the bird chews on the stump sufficiently to cause an ingrown feather. These must be removed surgically and often the feather follicle is lost or must be removed in the process.

Nutritional and metabolic needs are greatest during a full moult. Moult is also a period when stress to the bird’s body is increases.

If your parrots feather colour is dull or off-colour, if they are broken or have stress bars or if they fail to develop normally the bird is not in good over-all health. Sick birds will often fail to moult completely, this is a serious condition.

causes of a failure to moult or poor feather conditions are:

There is absolutely no need for supplements, tonics and moulting formulas if the bird is eating a balanced diet has access to fresh air and sunshine.